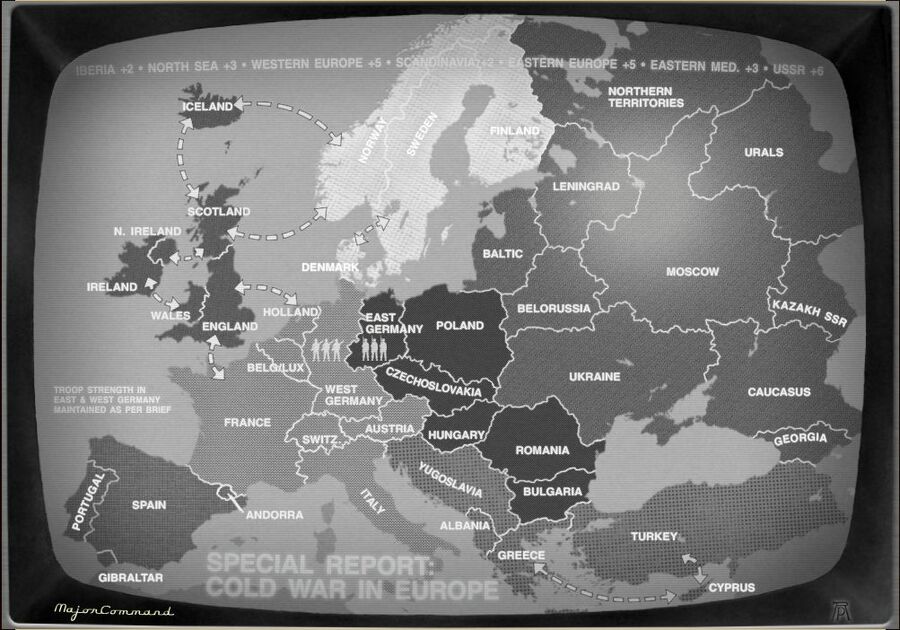 Europe: the Cold War is a standard Risk gameplay map, suitable for new and casual Risk players. There are 42 regions occupying seven bonus commands; Iberia, Scandinavia, and the Eastern Mediterranean commands were designed to be attractive starting locations.

The most attractive start, at first, glance, would be Iberia; it has only two borders to defend, and taking France means you only have to defend a single region. But it has often been the case that a player finds himself unable to do much from that point; Western Europe is expansive and difficult to hold, and driving north into England and the North Sea command is no easy task.

If a player does not open the game with much chance of grabbing one of the three smaller commands, there is some hope to be found in the middle of the map via the special rule controlling force size in Eastern Germany and Western Germany. If you hold one of these regions at the start of your turn and there are fewer than three troops in the region, the troop count will automatically be bumped up to three. If played right this is a de-facto bonus of two (or one) troops per turn, and all a player has to do is hold one region.

The catch, of course, is that you need to leave the region with a strength of just one or two troops, making it vulnerable to attack. West Germany is difficult to defend given the number of neighboring regions, but East Germany can be neatly protected by holding West Germany, Poland, and Czechoslovakia. That's a +2 bonus for holding four regions with three borders - equivalent to holding Scandinavia.

This map was created by Shepherd, as one of the site's 'launch' maps. We figured early on that as the site grew there would eventually be many maps depicting part of all of Europe, as there is a wealth of historical material from which to draw. The Cold War seemed like an obvious place to start; most Cold War borders are still relevant today, the era is still fresh in the memories of many of our players, and the notion that there could be a war that engulfed the continent was a realistic one.

The idea of having East and West Germany automatically reinforced to minimum troops levels evolved during the development of the map. The mapmaker's original idea was to have a series of American bases across western Europe and in Turkey which gave some kind of bonus when held in conjunction. From there we went to a distinctly east vs. west theme, with western bases opposing Soviet tank divisions along the Eastern Bloc states. The hope in all of these iterations was to give players a reason to pay attention early to the middle of the continent, unlike most maps on which players stake out a corner and build. The idea that East and West Germany would be resupplied and fortified by foreign powers was a natural evolution; think of it as a routine airlift of troops to hold a vital strategic position.

While the gameplay evolution was fairly smooth, the mapmaker had a hell of a time with the visuals on this one. The cold war presented 40+ years of material from which to borrow, but the mapmaker has a soft spot for the 1950s - it just so happened that as he was working on this he was refurbishing a 1950s television cabinet and replacing the blown-out CRT set with a flat screen. Even after the television idea was agreed upon it didn't start in black & white - in fact, it was at one point suggested that we take it full 1960s technicolor, a la the old Star Trek episodes.