Diplomacy is a system within Major Command Risk games that will allow you to communicate privately with your opponents and set up diplomatic agreements while playing Risk-like games.

All diplomacy is conducted in the Diplomacy tab on the game page.

This will allow you to send a private message to another player or teammate. While other players cannot read the content of your message, they will be alerted that you have sent one.

Will result in this being displayed in the public chatter.

All diplomatic communications and events will be logged in the messages section.

Diplomatic Agreements are truces over a set of borders. A request that is structured like this,

if agreed upon, the diplomacy will create a truce for 2 rounds over the Great Plains and Sunbelt borders. This means that if either player attempts to attack over that border they will be warned against breaking a diplomatic agreement.

Diplomatic agreements can be broken, however doing so may result in your diplomacy score being reduced, as well as being known as kind of a douche bag. 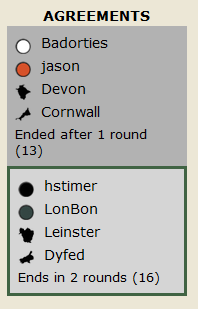 If a player breaks one of your agreement you will be given the option to confirm or not whether to charge it as an official break.

When you send a request to another player, they will have one turn to confirm or reject the offer, otherwise the request will be voided. All requests are noted in the public chat, although the specifics are left out. Agreed upon requests from all players will appear in the Diplomatic Messages section.

Agreed upon requests will appear in the left column of the Diplomacy Tab. If the agreement is still active, it will have a green outline. If it has been broken, it will have a red outline. Expired agreements have no outline.

Successful diplomacy is an art and the best practitioners will often employ psychological and behavioral tactics to be effective. Here are some general tips.

Your Diplomacy Score can be found on your Profile page, and on the Personnel Tab during a game.

A perfect score is 1000 (0).
The 1000 is the maximum diplomatic score a player can have. It is also the starting score for all new players.
The (0) shows the number of treaties broken.

There are a few rules that determine your score if you break a treaty.