What is Major Command - FAQ

MajorCommand.com is a fledgling community of casual turn-based strategy gamers who compete in a global domination type game. That’s a mouthful. At Major Command, you can play a strategy game like Risk and connect with other cool people who likes to do the same in a multiplayer game.

If you are new to the strategy game format, the best way to get up to speed is to read some of the other pages in this wiki. Try Getting Started, Playing Your Turn, and Game Interface

Why can't I join more than four strategy games?

Because you are a grunt. There are three classes of membership. New and free players are grunts and limited to four games at the same time and no real time games. You need to upgrade to strategist or commander class to play more. More information about how to upgrade here.

What Are Active Games online?

Your active strategy games are the any games that had already started and are ongoing. An active war game online could be further defined as:

How do the points work?

Points are awarded and taken according to the following formula: (Defeated's score/Winner's score)*30.

So if you are a cadet (1225) and are defeated by a Major (3000) then it looks like, (1225/3000)*30 or 12. So 12 points is taken from you and given to the winner. If you defeat that major it's reversed. (3000/1225)*30 = 73. So you would get 73 points from the Major. You get more points by defeating players higher ranked than yourself. For higher ranked players, the maximum number of points you can lose is 100 points in any one game. In Standard or Assassin games you get points from all players after you win. In Mercenary games, you get points only from those players that you eliminate. Click this Game Options to find out more about different game types.

How do I invite my friends to play online? 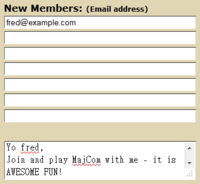 How to invite friends

You can invite anyone by starting a game and putting your friends email addresses in the New Member section. You can also add a note to let them know who you are if you like. Once you start the game they will get an email explaining what Major Command is and how to get into your war game online. They will need to sign up with the email that you entered in the New Member section.

Diplomacy is a feature that allows players to make and break truces across borders. Agreements are non-binding but breaking an agreement will negatively affect your diplomacy score. You can find out more about diplomacy here.

What are reserves in a war game?

Each turn, if you take over a region you get one reserve. If you get a matched or mixed set of reserves you may call them up for more troops. More info about reserves is here.

Can I reinforce my teammate?

You can deploy troops onto your teammate's region as well as reinforcing into their region. Any troops sent to your team mate will be under their control. During path-reinforcement, you may reinforce through your teammate as if you were one player.

Can I surrender or drop out of a war game online?

No, once the game has started you are in it until you are eliminated or you win it. There is no way to drop or surrender a battle once it's started. If you cannot take your turns, you will go AWOL and your turns will be skipped, being AWOL will still lose points once the game is finished, so try to play every turn.

What happens when my teammate goes AWOL?

Unfortunately, you are more or less screwed. Your teammates turn will be skipped. It is advisable to pick your team mates carefully if you are experiencing AWOL team mates.

What does go AWOL mean

When you miss a certain amount of turns in a row you are set to AWOL. During this time, all of your turns are skipped. You can come back from AWOL by toggling "return to base". More info about AWOL

I just got terrible rolls, are these dice rigged?

This is a common question of players who have been around long enough to see some long bouts of bad luck. The dice are randomly generated and each roll has no effect on any other roll. For your reading pleasure we have an in-depth essay on The Nature of Dice, Luck, and Streaks.

Why do I keep losing?

Even the best players will lose most of their fights. But the way that the points system works allows a single win to make up for many losses. If you find yourself constantly at kitchen patrol, there may be several reasons why.

I think someone is cheating, what do I do?