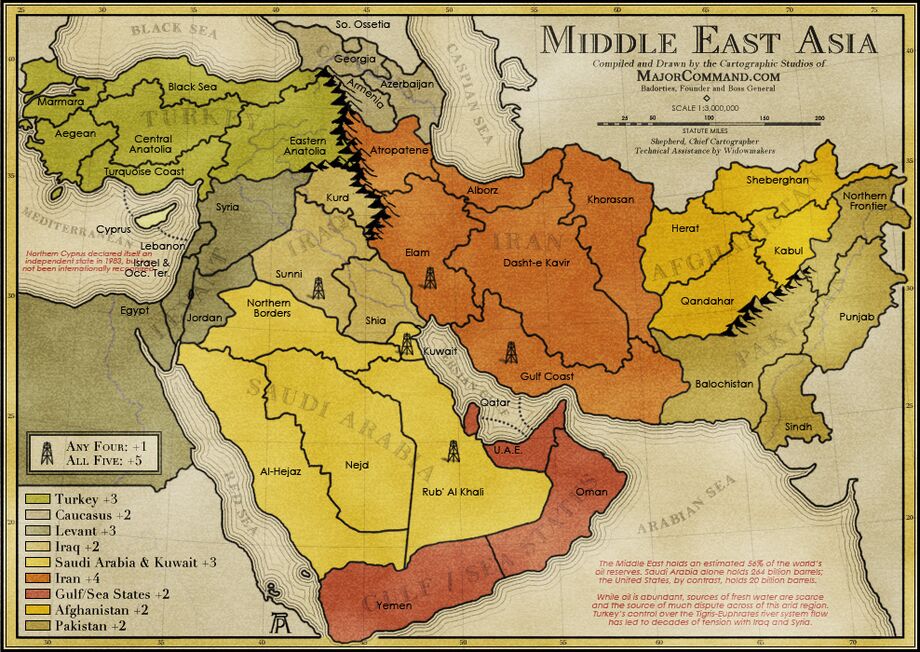 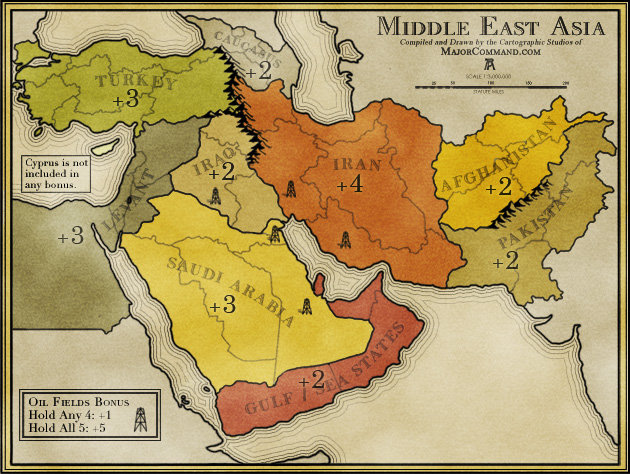 Welcome to the Middle East, a center of human culture and conflict alike since the beginning of civilization. But you know the history so let’s talk strategy; how you will do what hasn’t been done in centuries, conquer the Middle East.

There are 3 commands that can be easily taken and held, a good start for the player who prefers a small but steady flow of troops early on. These commands are Pakistan, Afghanistan, and the Caucasus. With the capture of Korasan and the Northern Frontier; Afghanistan can be held with only 2 borders. The same situation can be found in the Caucasus with the capture of Atropatene and its northern most territory of Georgia.

Although the Gulf States are worth the same reinforcement wise as Afghanistan; this command has many borders to protect and even with the capture of Rub Al’ Khali (greatly reducing the number of borders you need to protect), there is still the threat from the Gulf Coast across the Red Sea, leaving you with 3 borders to watch .

A practiced player may try his luck at holding a more centralized and beneficial command such as Iraq or Saudi Arabia. Not only do these commands provide more than the corner commands mentioned above, they also leave you close to the 5 oil wells on the map. The oil well bonus is hold any 4 for a bonus of 1 troop or hold all 5 for a bonus of 5 troops. A beneficial asset, but one that will not be easy to take or hold in the early rounds.

The island of Cyprus is not part of any command but should not be ignored for this reason. It can provide a convenient attack route between Turkey and Levant; but remember it also provides the same for your opponent.

The Middle East region has been the setting of conflicts since the dawn of civilization. Much as the Sumerians did thousands of years ago, was still rages in this region today over land, water, and natural resources. This map includes countries of the greater middle east - Pakistan and Afghanistan - which share many similarities with their western neighbors in terms of cultural history, religious identification, and conditions on the ground. The importance of oil to the region is underscored by the bonus given for holding oil fields; hold any four and you pick up a +1 troop bonus, but hold all five and you have a monopoly and can thus set prices and inflate their value.