What Are Reserves at Risk Game?

At Major Command Risk "Reserves" represent spare troops that can be "called up" to the front when you have accumulated a set of three reserves. A single reserve is awarded to you at the end of the turn only if you've successfully attacked and captured at least one region that turns. When a you have acquired a set of reserves, you can call them up for extra troops to deploy. Reserves are listed graphically in the Intel tab.

Color: Reserves come in three colors: red, tan, and white. A set of three Reserves can be called up when a player possesses either one of each color or three of the same color. Regardless of Risk game setting, Reserve color has no impact on the troop value.

Region: Each reserve is affiliated with a particular region on the map. If you control that region named on the card, it will have a flag to the right of the card. You will automatically be awarded a bonus of 2 extra troops in that region when you call up that reserve card as part of a set.

At the Beginning of a Turn: 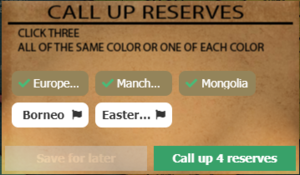 Just after starting your turn, if you have a set of three reserves available, this time (before the deployment phase) is a time when you may "call up" reserves. Simply click on the three reserves that make up a set in the pop-up window, and click the Call Up Reserves button. If you do not wish to call up reserves, click the "Save for Later" button. However, the "Save for Later" button is not available when you have 5 cards. You must "cash" or turn in your cards for the reserves at 5 cards.

After Eliminating Another Player

To the victor goes the spoils. The Reserves of a defeated player are immediately awarded to you when you eliminate them from the risk game. If this leaves you with four or fewer Reserves, then you continue your turn as normal. However, if you end up with five or more reserves, then you MUST call them up and deploy the extra troops before finishing with your turn. If, after calling up a set of Reserves, you still have five or more, then you must call up another set.

There are three different settings for Reserves available to choose from when the Risk game is created: Escalate, Escalite, and Flat Rate, all of which assign different values to a given set of Reserves.