At Major Command Risk like games, once a player has deployed all their Troops, the player can then Assault enemy Regions, hoping to overcome the defenders and conquer the Region. Typical action for a risk-like war game. 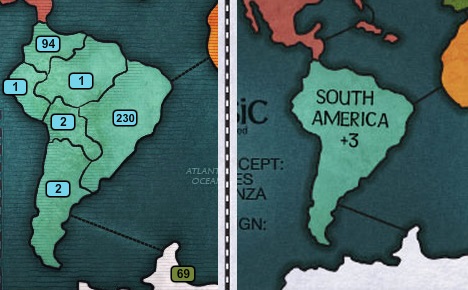 At risk-like strategy games, certain groups of regions (like South America from the Classic Evolved map, +3 bonus) will give you a bonus when you hold them all at the same time. These region groups are called Commands, which on most maps are of the same color so that you can identify them as one command easier.

It's usually a good idea to try and grab one to give you a leg-up on your opponents. Command information can be found on the main map and in the Brief.

At Major Command Risk like game, when you miss a turn, the troops you would have been given are awarded to you (not including bonuses for any commands held) at the end of the next turn you take, although you will be given the amount of troops you are supposed to have on the turn you missed, the Deferred troops can only be deployed on one region with no risk for your strategy.

Note: When playing a game of No Reinforcements, there would be NO deferred troops given.

While playing a risk-like game at Major Command often referred to as diplo, this refers to agreements and/or communication between players that take place in the Diplomacy Tab.

Can be used to either refer to the first phase of a turn, when the player is given a set number of new Troops to deploy on Regions that player controls, or to the deployed Troops themselves.

A region, put simply, is part of a map. For instance, the USA map is comprised of 48 regions, one for each of the 48 states of the continental United States. At the beginning of the game, regions are handed out randomly, with each player getting an equal amount, and any left over starting neutral. The more regions you control, the better, as holding many regions can net you, extra troops, to deploy at the beginning of your turn.

At the beginning of each player's turn, they receive a Region Bonus that is equal to the number of Regions that player controls, divided by 3 (and rounded down), with a minimum bonus of three Troops.

After a player has ended their assaults, they may have the option to move Troops from one Region to another. The specifics of Reinforcement are covered on the Game Options Page

In all but non-Reserves games, at the end of every turn in which you successfully conquered a Region, you receive a Reserve. There are three colors of Reserves: red, tan, and white. Reserves can be called-up for a Troop bonus when a player has three of one or one of each, the troop bonus amount depends on the Game Options. Each Reserve is also labeled with a Region name, and if you control that Region when you call up that Reserve, two Troops are automatically deployed on that Region and that's how it works at most similar to Risk games. For a more in-depth look at reserves, click here.

The basic (and really, only) player-controlled units are Troops, which you use to assault your opponents and which defend themselves against your opponents' assaults. You start off with three troops in every region, and every turn, you get more troops to deploy, depending on various factors.

. Troop containers have different shapes on each map, but the color is determined by you, and the number is how many troops are in that given region.

AWOL stands for Away Without Leave. A player can get "AWOLed" by the system upon various reasons - for example missing turns. Please go to AWOL for more info.