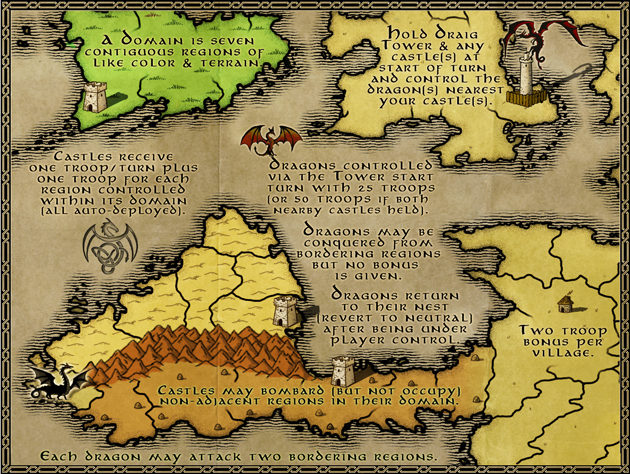 Twelve Domains is what we call a Conquest Map; rather than starting with an even share of all of the regions on the board, players' starting positions are limited to the Castles, with the other 110 regions starting neutral. The more Risk players, the fewer starting positions each Risk player will have. (As a result, the maximum number of Risk players on this map is 12.) It is up to you to build a kingdom, and then to expand your influence into the rest of the world.

Castles will be the initial source of your power and influence; each castle receives one auto-deployed troop per round, plus an extra troop each round for each region held within that Domain (regions of like color). It is as if you are a feudal lord, collecting taxes and recruiting soldiers from the lands you control. Strategically your first move will be to secure the lands within your domain to ensure regular income.

Castles can also bombard (knock down to 1 neutral) regions within their Domains that they do not immediately border. Think of it as having a catapult or cannon atop your castle; you can pummel distant troops but not occupy those lands.

Once you leave the safety of your Domain, you can pick up extra troops by controlling the Villages. But the real prize is in the Dragons that lie in wait just across your borders. The Risk player who controls Draig Tower also controls the power of the Dragons. Hold the Tower and any Castle/s, and control the Dragon/s nearest the Domains and Castles you possess. Dragons spawn with a value of 25 troops, or 50 if you hold both neighboring castles. But at the end of your turn the Dragons return to their nests - they revert back to neutrals, awaiting their next command.

Another little trick is that the Dragons can be attacked from neighboring regions; this creates a back door (though a very tough one) that allows access from one Domain to another.

Twelve Domains is our first stab at a Conquest Map, though we are sure there will be more. While some maps are tailor-made for 1v1s or real-time Risk games, this is a map that asks you to sit back and soak it all in. With over 120 regions and plenty of space between game players, Risk games won't be decided in the first few rounds. Bad dice takes a back seat to patience and timing on this map.

The graphics (by Shepherd) are designed to evoke the feel of a fantasy world of ancient kingdoms and lurking dragons. Key contributions to the Risk gameplay were made by Widowmakers and Incandenza; making a map this big takes something of a team effort.