A Tournament at risk like games (or as some players call them, a tourney) is an organized competition consisting of at least 2 rounds of elimination games, either for teams or singles. You would need to win each round to advance in a tourney, and the winner would be the one who comes out victorious in the final round.

Finding and joining an open tourney 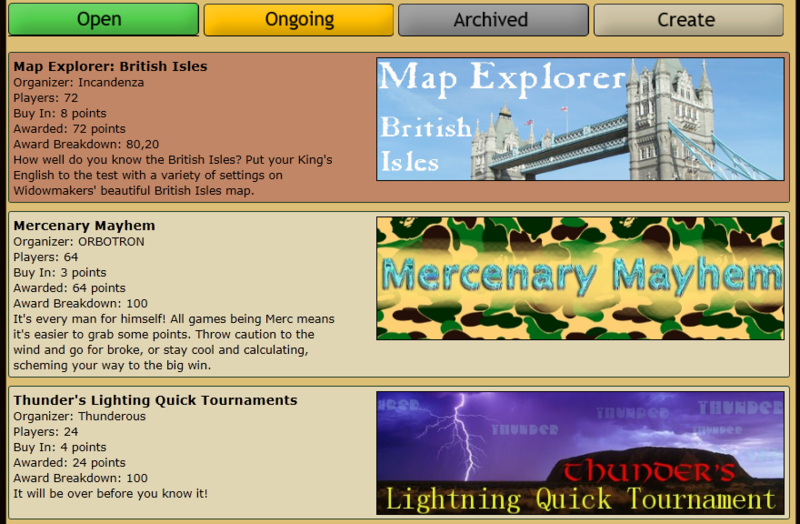 Note: If you want to drop out from a tourney, you can do so before the tournament starts. Just get to the specific tournament, and click the drop out button, which would be there instead of the Join Now button.

Unfortunately, tourney is a feature for Strategist and Commander Classes only. If you want to join a tournament, you will need to upgrade to either of these classes. For more information, visit User Classes.

How do tournaments work?

Only one player (or one team) will be able to advance to the next round per game. If you get eliminated... End of story.

After a tournament had been created by one of the Tournament Organisers and had been opened to the public to join, everything would be automatic. In that meaning:

Players will be randomly placed by the system into each round, if there are more than one risk game in that round. For example, if the first round of a tourney had 6 risk games of 6 players, then the 36 players would be randomly put into one of them. In a team tournament, who your partner is will still be random. After each round you will most likely have a different partner.

How do the points work in tournaments

Joining a tournament will require you to pay an entry fee, and most tournaments would cost between 4 points to 20 points. The points will contribute to the tourney pot (ie. winnings). For example, a tourney with 24 players buying in 4 points each will produce a pot of 24x4 = 96 points.

The pot is the winnings at the end of the tournament. The award breakdown % will be stated on each tournament page. Below are a few typical pot breakdown percentages:

Team tournaments work in the same way, except the winnings will be equally divided amongst each player of the team.

Games of tournaments are not really any different to normal Risk games. Points will still be awarded as per usual. The only thing different is that a tournament game will be highlighted red in your game list.