Please check your inbox to confirm you email.

Major Command is currently in BETA. You can choose to play a Casual 24 hour game, or a Real-Time game.

Getting Started: Learn How to Play at Major Command

Do you want to play Risk online successfully? Do you want to win the game and conquer the world? Then reading to the bottom of this page will greatly reduce the risk of losing your first game at Major Command! However, if you are confident in your abilities to play Risk or any other strategy game, then you can join a game right now and start playing.

New User First Steps: How to take a Basic Turn

This helpful video will take you through How to take a Basic Turn. WATCH IT NOW CADET!

How to Join a game

Now this is important! There are many game options available to you here at Major Command but there are two main types of games, casual and real time.


Casual Games. You may be unfamiliar with the casual play, but it's some damn fine gaming. Every player gets 24 hours to take their turn. "WTF! That's too damn slow!" I thought you'd say that, but here's the deal - most players are in multiple games at the same time, some even have 10 or 20 actives games on the go. But since playing a turn may only take 3 or 4 minutes, then it's not hard to take several turns a day. And the best part is, you can take your turns when ever YOU want to - with your morning coffee, during a boring lecture, while the boss isn't looking, whenever. It's the reason most players end up choosing casual games to get their strategy gaming on. 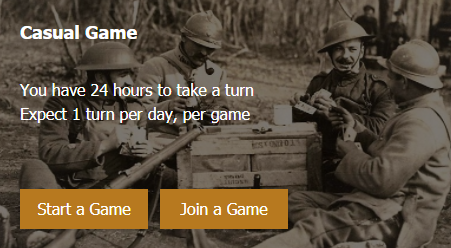 Real Time Games. If you have got 30-60 minutes to spare, then you might want to jump into a real time game. Every player gets 3 or 5 minutes to take their turn so you better be around. The fewer the players, the quicker the game. Games with 6 or more players can last over an hour and are often won more with endurance than strategy. 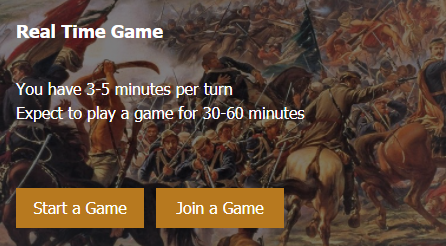 NOTE: Games will start once all available slot are filled up with players. Depending on the number of empty slots, it may take seconds, minutes, or even days before the game starts.


If you want the game to start immediately, look for a game that has only 1 empty slot available.

New User First Steps: How to Join a Game

This helpful video will take you through How to Join a Game. WATCH IT NOW CADET!

One more thing! We play civilized games of World Domination here, similar to other strategy games you might have played like Risk, Settlers of Cataan, or Axis and Allies. If you have never played any of those then read this guide for total noobs. If you have, then you're probably fit for command.

Ok, we've taken up enough of your precious internet time. If you are really looking to score some points and move up in rankage, then we suggest you watch the following video for new users. Good luck out there!