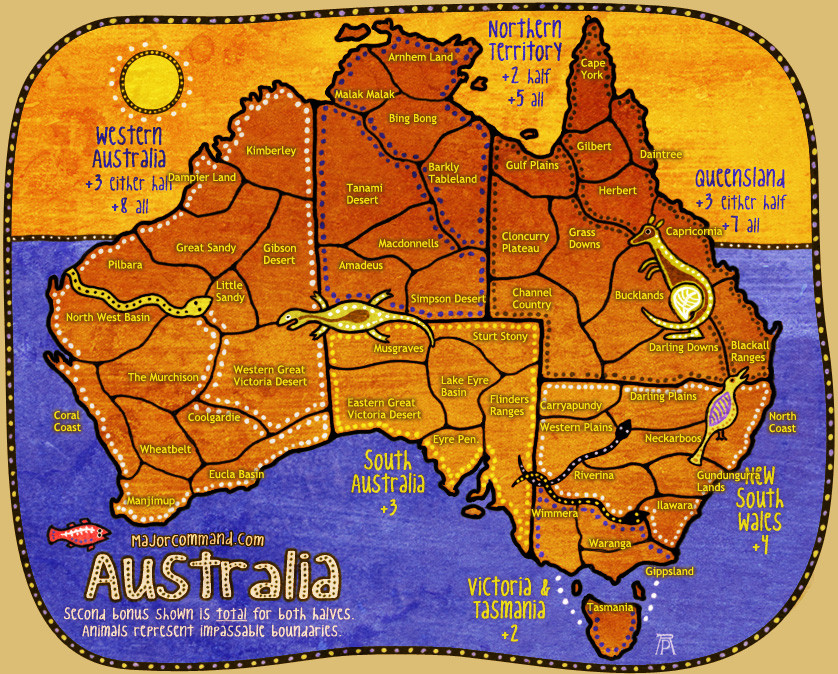 Australia is a Risk game map that is centered around one special feature - the nested commands. These nested commands provide great starting points to grab a good foothold and expand your control from there.
The most obvious command to try and hold at the beginning is still Victoria & Tasmania, with only 4 regions making up the command. All of the half commands are just a viable, The northern halves of Queensland and the Northern Territory, having only 3 borders that need defending are the easiest to hold. As all of the commands are either split (NT, WA, QLD) or small (VIC & TAS, NSW, SA) every command is viable to hold unlike some other commands cough***Classic - Asia***cough. So the best way to proceed in an Australia game is to either try and take a command where you have the most of your troops in or to go for a command that seems as if you will see the least resistance from other Risk players.

Up until now our compendium of Risk game maps has been without the continent down under, Australia. The map depicts political and geographic divisions, while also (we hope) capturing the spirit of Aboriginal Australia in its design. Where most maps would show mountains as mountains and rivers as rivers, we've taken a less literal approach with the impassable borders, with snakes as rivers and animals representing the ranges.

In terms of play, the only trick to the map are the nested commands. Australia has only six territories, which we felt wasn't sufficient to represent an entire continent. And some of those territories are vast - Western Australia would be a dead zone if it stood alone as a bonus command. In order to bring the entire map into Risk play early in the Risk game the larger commands have been split in two; hold one half for the first bonus, hold both halves and pick up a little something extra. For example, either half of Queensland nets a +3 by itself, but if you hold the entire thing you get +7.

Finally, as you play Risk game you may discover that there are some "Easter Eggs" built into the map. Of all the maps I've made for this site, I definitely had the most fun creating this one. I hope you enjoy it.