Alright, soldier. You had probably liked Playing Risk Online. At Major Command Risk, if you've read the Wiki to this point, you're familiar with all the tools at your disposal. This page aims to teach you some effective ways of using your troops. What follows is a collection of maneuvers created in the heat of battle and honed to an edge over time. Many of these will become second nature while others should only be utilized when the time is right. We will start with some of the very basics, and progress on to more in-depth ideas. Once you are able to command your troops effectively, you should move on to learning the more broad discipline of Advanced Tactics and Strategies at Risk online game.

Suicide Is (not) Painless 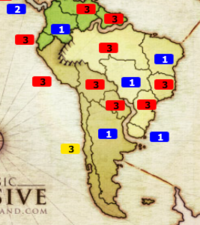 Our first move is not a move at all, but rather a practice in patience. There will be times when you are frustrated, angry, drunk, tired or otherwise emotionally compromised. You must resist the urge to go on a suicidal rampage with your tiny little squads of 2 or 3 troops. When playing Risk online you never want to attack 3 troops with 2, or even 3v3. It's a numbers game, and the numbers say that most likely your little bender will take you from Exhibit A to something like Exhibit B, you being blue, and your opponent being red because he's laughing so hard. That's how Risk-like games work.

At Risk online this tactic requires a specific situation, one that your opponent puts himself into. If they have mistakenly surrounded a large stack of their troops with 1s or 2s, the idea is to leave that area alone, effectively trapping that stack from making any assaults. Depending on the Reinforcement Settings this can have a varied effect, from simply delaying an attack to completely neutralizing that stack of troops.

Slithering along the path of least resistance, you aim at inflicting maximum destruction. If you find yourself in a position where you are able to break through enemy lines in one spot, this technique is focused on reducing your opponent's Command Bonus. At Risk online game when enemies hold multiple Commands, you need to look for a path into each one with either low troop counts, few territories to travel through, or a combination of the two. If successfully executed, you can often follow up with the Mine Layer for a truly devastating attack.

You want to live, you want your enemies to die, leave the neutrals alone. Using neutrals correctly can easily make the difference between winning and losing. In most situations, it will benefit you more to focus on battling your opponent than to waste troops on killing neutrals. At Major Command Risk online when you attack a neutral you are risking your troops and none of the enemy. By not attacking a neutral, you are very often creating a human shield, a wall of troops that don't belong to you protecting one of your flanks.

When the world isn't fair and you need a place to go, this may be an option. Along with glory and conquest come humiliation and defeat. It will happen, you will have a horrible run of dice, everyone will decide you look like a weak little morsel. Whatever the reason, you need a defense, and fast. One way to make yourself look less attractive is to get rid of Reserves if at all possible. This will be one less reason for somebody to take you out and will give you some troops to take with you into the bunker. The next step is to consolidate your troops. Depending on the Game Options, this might mean reinforcing into many smaller groups, or when possible, into one large turtle stack, impenetrable (hopefully) to attack. You hunker down there and hope that the other players will ignore you, go on fighting each other, and ultimately die at your hand in a swift surprise attack when you have grown strong. Don't look strange. That's how it works. To be able to Play Risk Online successfully and win many battles you need more practice playing Risk in different variants.

They are going to take that ground, but you don't have to make it easy. When you encounter a situation where it is very likely an opponent will conquer a certain area, it's sometimes tempting to cut and run, leaving your poor ones behind for the slaughter. Hard as it may be, sacrificing more troops may be the right move. Using a few spare troops to fortify those 1s into 2s will typically inflict more than twice the damage on your enemy.