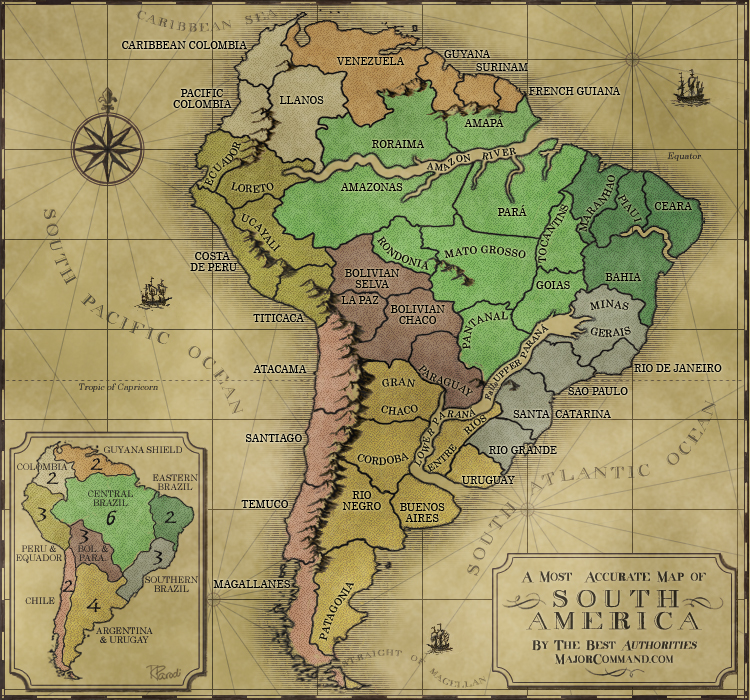 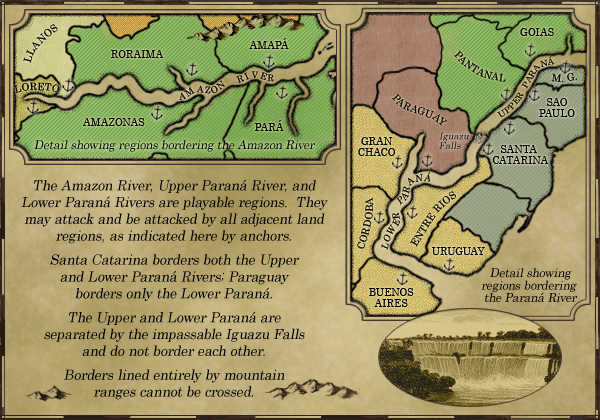 This was designed to be a fairly straightforward map, with Risk gameplay simple enough for casual players and beginners. There are a number of good areas on the map in which one could start - five Commands made up of four or fewer regions and two more that have only five regions - so a Risk player is unlikely to feel prematurely defeated after a round or two. But it was our hope that the introduction of river systems as live regions would throw in some twists and reward those who pay closer attention.

Two South American river systems are depicted on the map: the Paraná system in the southeast, and the Amazon cutting across Brazil. Unlike most maps in which rivers serve as impassable obstacles, these rivers are themselves playable regions. The rivers can attack - and be attacked by - all land regions through which the rivers pass. Note that the Paraná is actually split into two regions, because the unnavigable Iguazu Falls splits the river into Lower and Upper stretches.

As the rivers don't help you complete any bonuses, casual players may be inclined to overlook the rivers and focus on the bonuses. But in some cases the rivers are key to taking and holding bonuses - try holding Southern Brazil without Upper Paraná and you won't hold it for long!

Current Risk map was created by Shepherd, and went live to the public in October of 2010. As it was released early in our BETA testing period, the development process was a private one with input coming from members of the MajCom team.

Early versions of this Risk map had both mountain ranges and rivers as standard impassable borders between regions. However, there was a concern for this layout, as the rivers, in this case, split both the Brazil and Argentina bonus commands. The rivers - especially the Amazon - would need to be riddled with crossings so as not to make these two bonuses impossible to hold. Having to cross everywhere along the rivers would have made them moot.

The rivers were originally intended to be neutral starts, but they played well enough as-is once the map went live that we decided not to mess with a good thing.