Major Command Risk uses a proprietary Game Interface that is intended to be intuitive, fast, and user-friendly. If you're new to the site, here's a quick guide on How to Play Risk Online.

From left to right along the top row:

1. Action button: When it is your turn, a "Begin Turn" button will appear. Click this to start your turn, decline to call up reserves, end your attack, end reinforcements, and jump to the next game where it's your turn.

2. Status bar: Shows what's going on at the moment, whether it's your turn or someone else's.

4. Time left: Time left for the active gamer to complete their turn.

All Risk players in the game are listed in the order in which they take their turn. The active player's name is bolded and underlined. In games with a large number of Risk players, you may use the right and left arrows to scroll through the complete gamer's bar.

Each Risk player is listed with troop color first, then username, then number of reserves.

TIP: You can hover over a gamer's name, and all regions controlled by that Risk player will be highlighted.

The map is where the game itself is played. The map shows regions and troops. You can hover over a region to show what other regions it connects to.

The map is also where the various windows are displayed.

TIP: All windows may be dragged elsewhere on the screen.

For a full rundown on what you can do on the map, see Playing Your Turn.

The Info Tabs are just what they sound like, various tabs that give you various bits of information. There are four tabs, and they may be selected at any time.

Tallies the total troops, region count, previous deployment, and projected deployment of all Risk players. It also shows your Reserves.

Where Risk players may post messages for everyone to read, just their teammates, or make notes to self.

note*: There is no "TO SELF" button in a Team game.

To be recoded soon into the new UI. Stay tuned!

The control center for diplomatic endeavors. Shows active, expired, and broken truces. You can also propose truces of your own, accept or deny truces proposed by other Risk players, and send private diplomatic messages. Note that when you send a diplomatic message to another gamer, that fact is noted in Chatter.

Shows a timed record of troops deployed, commands held, reinforcement call-ups, regions conquered, and troops reinforced for each player's turn. Each line has information of the time, gamer name, gamer color, and what they did. 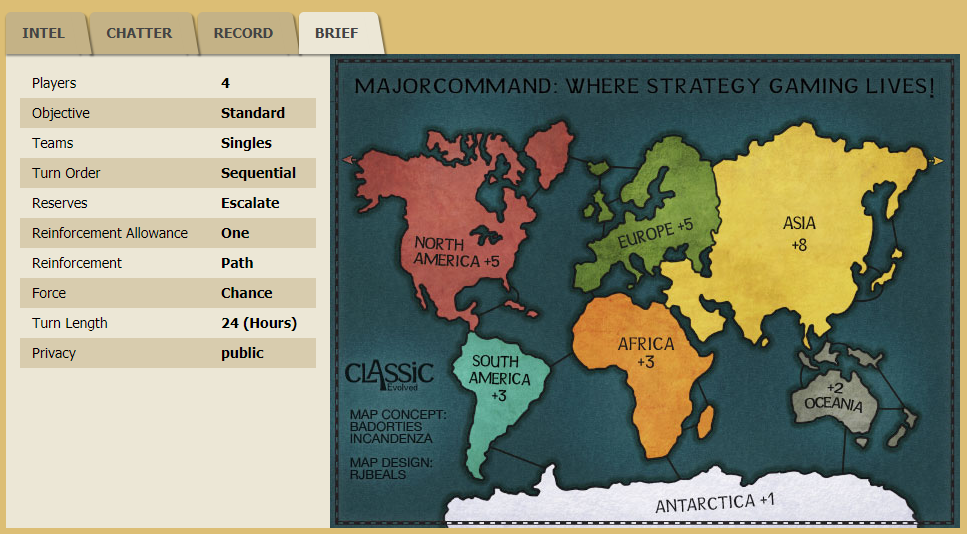 To the left are the Risk Game Options, to the right is a miniature version of the map, which often contains important gameplay details and command (region) bonuses. If you are playing many casual games, it is always a good idea to look at the brief first. The game options or settings for the game will help you plan your next move.

To be recoded soon into the new UI. Stay turned!

Starting from the left, it shows the player's color on the map, then the username of the Risk player, their rank, score, diplomatic score, their honor (which is going to be dependent upon the public's ratings), and last but not least, "My Ratings", where you select if the gamer is honorable or not, this selection is saved and will be displayed so in all your games with that same Risk player. The rating you give would also affect the gamer's honor score.