What is Major Command Risk? 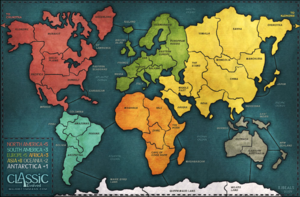 Major Command is a serious online strategy gaming website where you can play classic board games like RISK, Battleship, A Game of Thrones, Diplomacy! If you like board games, then you'll love Major Command Risk which takes the strategy of a classic board game like RISK, and brings it online into the 21 century. However, unlike the original board game RISK, which only has one map to play on, and a few basic strategies, Major Command Risk has a large selection of over 20 great maps that go from a total global dominating scenario, down to a local region as your battlefield. Regardless of your terrain, the main goal is to conquer the world by crushing your enemy!

How is Major Command different from other websites to play Risk online?

First off, there is no place to play risk online! There are a few knock-off sites, but they all suck. Mainly it's because their maps are awful and/or their interface and gameplay is poor. Don't waste your time. Major Command is far superior than other online risk games in many many ways.

Major Command has a world map, or other similar maps, which are comprised of regions. Each region is like a province or country. You will be assigned randomly on different regions, with usually 3 troops given in each. You are able to control your troops each turn with 3 separate commands. 1) Deploying 2) Sending them to assault 3) Moving them from one region to another. For more info, click Playing your turn and Terminologies.

Once you conquer the whole map (or killed your target), you win points and rise through the ranks among players. The higher your score, the higher your rank. If you win enough points, you might see your name on the Scoreboard! For more info, visit scoreboard and ranks.

What to Expect from Major Command Risk

Turn lengths: 3 or 5 minutes Game lengths: 20 minutes minimum Real time games are quick, and requires you to stay around from the game starting to finishing - so make sure you have time to spare if you join or start one.

Turn lengths: 24 hours Game lengths: Greatly varies depends on players Casual games are as they are - casual. When it gets to your turn, you have 24 hours to take it, so you can literally be taking your turn at anytime you want - midnight, half way through a class which you are close to snoozing at, after your first bite into your lunch burger, or when your boss is not looking... any time at all. You would expect a turn per game everyday, so you can check in once or twice and take your turn in less than 10 minutes. Many players play a stack of casual games at a time - and that is what you call epic gaming, as they may have four (or forty-four) turns to take when they log in.

It is normal to lose the first four or five (or twenty) games when you just started. Everyone has a different rate of which to get used to and get good at the game. Personally, my first three weeks with the first eighteen or so games was a failure. But it is very likely that when you start to win games, your points come back very quickly, as a win can make up for many losses. For hints on how to increase you chance of winning - go to Basic Tactics & Strategies, Advance Tactics & Strategies, Video Tutorials and why do I keep losing.